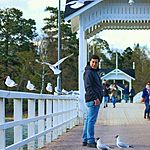 February 11, 2020
High levels of phenotypic variation in resistance appears to be nearly ubiquitous across natural host populations. To date, the molecular processes associated with this variation in nature are poorly known, although theory predicts resistance to evolve at specific loci in response to pathogen -imposed selection. Nucleotide-binding leucine-rich repeat (NLR) genes play an important role in pathogen recognition, downstream defense responses and defense signaling. Exploring the depth of NLR natural variation has the potential to increase our understanding of how NLR diversity is generated and maintained, and how to manage disease resistance. Here, we sequenced the transcriptomes of five different Plantago lanceolata genotypes in response to inoculation by the same strain of obligate fungal pathogen Podosphaera plantaginis. A de novo transcriptome assembly of RNA-sequencing data yielded 24332 gene models with N50 value of 1329 base pairs and gene space completeness of 66.5%, suggesting a high-quality assembly. The gene expression data showed highly varying responses, with each plant genotype having a unique gene expression profile in response to the pathogen, regardless of the resulting resistance phenotype. We discovered a diverse NLR repertoire in P. lanceolata which is consistent with high phenotypic resistance diversity and high genetic diversity of the species. We find evidence of selection generating diversity at some of the NLR loci. Jointly, our results demonstrate that phenotypic resistance diversity results from a crosstalk between different defense mechanisms. In conclusion, characterizing the architecture of resistance in natural host populations may shed unprecedented light on the potential of evolution to generate variation.